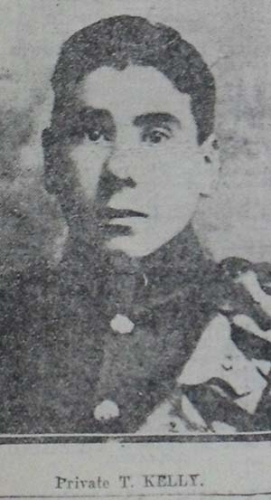 We regret to announce the death of Pte. T. Kelly, youngest son of Mr. and Mrs. P. Kelly, 16, Green Lane, Tranmere. He enlisted in the Denbighshire Hussars Yeomanry in 1915, being transferred to the Royal Welsh Fusiliers in France. He had been on active service ten months, and on June 19th was hit by a shell in the chest, which penetrated the head, and consequently died at the base hospital. He was 19 years of age, and prior to joining the Army was employed by Messrs. Cammell Laird and Co. Sergt-Major Kelly, eldest son of Mr. and Mrs. P. Kelly, has already died serving the colours. Two other sons are still on active service. Great sympathy will be felt for the bereaved relatives.