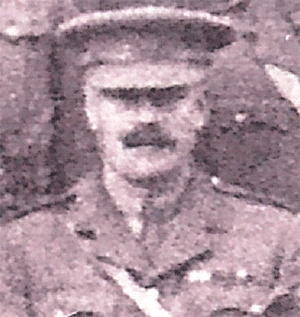 Overseas service was seen in the Boer War with the 3rd Battalion, Imperial Yeomanry, where he received the Queen’s South African Medal with ‘Cape Colony’, ‘Orange Free State’ and ‘Transvaal’ clasps, and the Jubilee Medal of 1897. He also received the King’s South African Medal with ‘1901’ and ‘1902’ clasps. Later he served with the Gold Coast Regiment in West Africa and in July 1904 was appointed Captain of the 4th South Wales Borderers Militia, and subsequently resigned his commission in June 1905.

Recalled to the colours in September 1914, he was promoted to Major and put in charge of C Company. In November 1915 he sailed to Salonika to help the Serbs in their fight against the Germans, Austrians and Bulgarians.

The Regimental diary records that on 15th January 1917, Major Royle, Captain H.L.Jarman MO to the Battalion, and Lieutenant Turner, RFA, were killed by the same shell at the door of the Officers’ Mess.

He was the son of Richard Popplewell Royle of Hough Green, Chester, and was married to Mary with one son. He is buried at Karasouli Cemetery, Thessalonika and had been made a Freeman of Chester in 1894 by birth.


Cheshire County Memorial Project would like to thank Chris Pate for the picture and information on John.