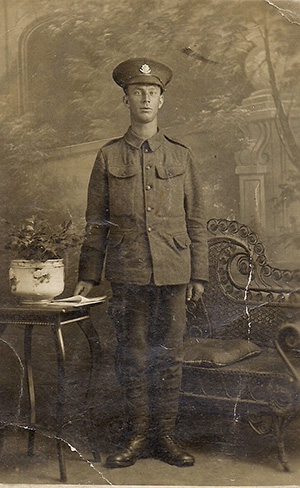 George was born in Daresbury, Cheshire in 1888, he was one of three children born to Thomas and Mary Ann Riley of 80 Budworth Road, Tabley. Thomas was a horseman on a local farm.

In 1908 George married Hannah Eliza Smith and they set up home at 25, School Lane, Lostock Gralam, where they had four children, the 1911 census shows George working as a shiftman at the chemical works.

George enlisted on the 17th July 1915, he would spend the first two years based in the UK, he was called to service on the 21st February and then on the 17th July 1917 he embarked for France. On the 22nd September 1917 he was posted to the 16th Battalion joining them on the 28th.

He was reported missing in action on the 22nd October 1917, the battalion had taken over the frontline at 5:30pm on the 19th, South of Houlthurst Forest. On the 21st the battalion started to move into position for an attack the following morning.

The operation of forming up was carried out expeditiously and quietly and was concluded by 9:30pm. The arrangements made by Captain H R Makin for marking out the frontages as pointed out to him the previous evening and for meeting the other companies with guides worked most satisfactory. The night was bitterly cold and there were heavy showers after midnight, the men underwent extreme discomfort and were wet through and perished with cold before zero hour. The tea and rum provided by brigade did not reach us.

The enemy kept up a steady barrage throughout the night, the barrage most intense at midnight, 2am and from 4am onwards.

The battalion advanced at zero hour against the objective following our barrage closely, though the barrage only went forward at a rate of 100 yards every 8 minutes. Owing to the state of the ground which was a mass of new shell holes containing at least a foot of water, the troops needed the utmost effort and experienced the greatest difficulty in keeping up with the barrage.

At 6:20am Y company 15th BN Sherwood Foresters began to arrive to hold our original front line, at about the same time some slightly wounded men passed BN HQ with about 20 prisoners and gave information that the attack was proceeding satisfactorily.

At 6:50am Captain Burnett came to BN HQ and reported that Z Company had gained their objective (Marechal Farm) and were consolidating; but that the centre and left were held up, that most of the rifles were useless owing to the mud and that losses were very heavy. Lt Col Sant arranged with Major Morton commanding 15th BN Sherwood’s for his Y Company to move up from our old line and his Y Company to move up and hold our original line, Lt Col Sant then went forward with Captain Burnett collecting stragglers en-route to the south east edge of the wood, from these parties were organised to try to outflank a concrete pill box which the enemy eventually evacuated; but any further advance was held up by rifle fire from trenches immediately north.

Lt Col Sant then moved to Colombo House Farm where he saw Captain Millington M.C office commanding Z Company and Lieut Sherlock of the machine gun company who had got a Vickers gun up to that point, all that remained of Colombo Farm was a concrete pill box, when capturing this point Z company had killed six Germans and captured a machine gun.

Lieut Sherlock MGC was ordered to send a Vickers gun to Marechal Farm, which was done; but two of the men taking it up were hit by snipers and the barrel casing of the gun was punctured by a bullet.

The situation remained unchanged till around 4:30pm, when the enemy counter attacked from the left in some force and under the cover of an intense barrage, finding themselves fired on from three sides the remnants of W, X and Y companies and Y Company 15th Sherwood’s fell back out of the wood and eventually fell back to our own line.

Our relief by the 15th Cheshire Regt started soon after midnight, Casualties 9 Officers 329 Other Ranks.

During this fighting George was seriously wounded, according to the Red Cross files he was found by the Germans three days later on the 25th October and taken to hospital, he died from them on the 25th November at Kreigslag German Military Hospital in Ghent.

George is buried in Ghent City Cemetery, Belgium his grave reference is B.2