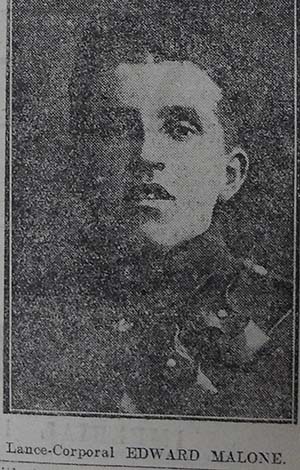 Official news has been received to the effect that Lance-Corporal Edward Malone has died of wounds in France on June 20th. Lance-Corporal Malone, who in civil life lived with his father at 88, Beckwith Street, joined the Royal Engineers in November 1915. Prior to this the deceased soldier was employed in the telephone department of the G.P.O. In a letter to Miss Malone (Lance-Corporal Malone’s sister) his officer speaks of him in the highest terms. “He was a very popular comrade …. and he died doing his duty like the good soldier that he was.