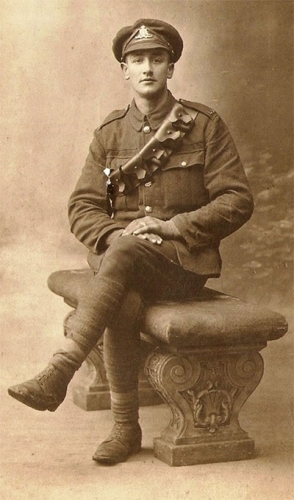 It has been officially notified that Gunner Reginald Peers, R.G.A., so of Mrs. Peers, Chapel Terrace, Chester and of the late Mr. Alfred Peers, blacksmith, of Commonhall Street, Chester, died of wounds on November 29th. Gunner Peers was married and leaves a widow and one boy. He formerly was a barman with Mr. George Barlow, Bridge Street. He was born in Chester and attended Grosvenor St. John’s School. His father was one of the bellringers at the Cathedral, a position he had held for 28 years.


The Cheshire Roll of Honour would like to thank Nigel Meyrick and Mrs. C. Meyrick for the picture of Reginald.