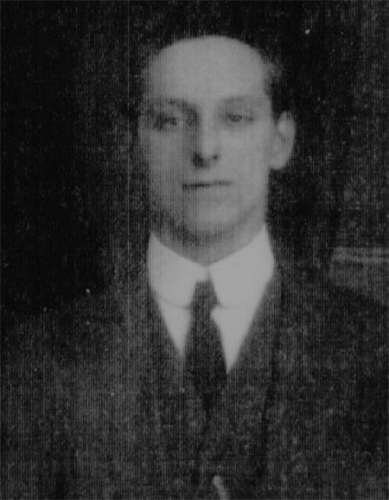 Tom Cyrus Oldham was the eldest son of Frank and Mary Oldham and the brother of Ada Mary, Marguerite, Miriam, Frank, Hannah Tempest, Wilhelmina, Dorothy and William. He was born at their home at 40, Broom Grove Lane, Haughton, on May 21st, 1887. He was probably named after his father’s elder brother, Tom Cyrus, who had died earlier that year at the age of 33.

He married Emma Morrison on August 12th, 1912 and they lived at 16, Brooks Avenue, Hyde, in a house which is still standing. He worked as a warehouseman at Cheetham’s hat works in Hyde and used to be in the choir at St Anne’s, Haughton. Later on, he attended Trinity Methodist Church on Hyde Road, Denton, where he and Emma were married. He was also a member of the Hyde branch of the Voluntary Aid Detachment which provided field nursing services and he had acquired several ambulance certificates. 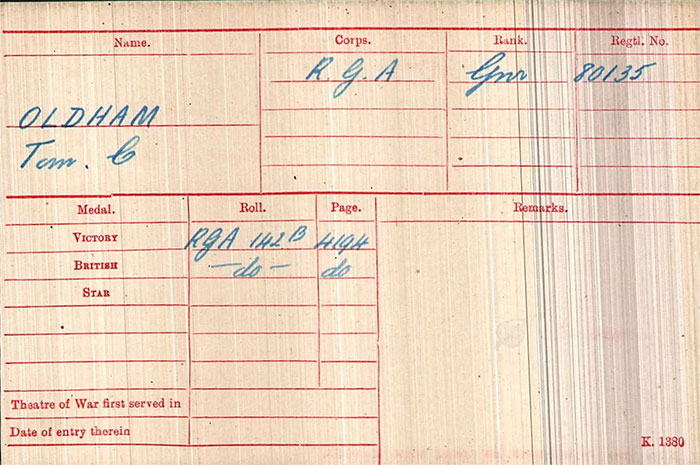 On December 8th 1915 Tom Cyrus Oldham enlisted in the Royal Garrison Artillery and he was shipped from Folkestone to France on October 5th 1916. He served with the 175th Siege Battery and at 30 years of age was killed in action in France. The war diary for the day gives no indication as to what happened it simply states 153 rounds fired. 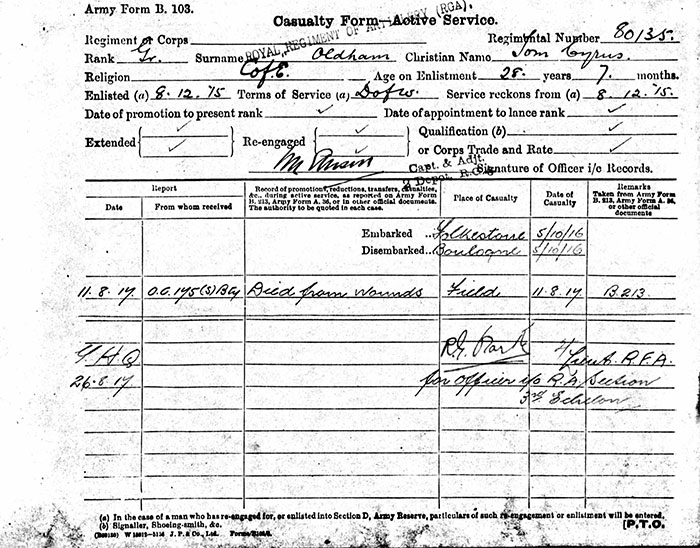 The place of his death on that Saturday morning of August 11th, 1917 was probably by the side of what is now the D51 road running north of Givenchy-en-Gohelle. He was buried the following day at nearby Souchez in a cemetery adjacent to the site of the Cabaret Rouge on the D937 road. There are nearly 8000 war casualties buried there and Tom lies in a grave (II. E. 15) which has as its inscription, "To live in the hearts of those we love is not to die."

Major C. Stuart King wrote, “He was struck by a fragment of shell and died almost immediately.” A remarkable and very precious collection of three original letters exists. They were written to Emma at the time of Tom's death by other military personnel and are in the safe keeping of Barbara Oldham: Sergt. Strike wrote, “Poor Tom met his death about 8.30am this morning. He along with his section were stood near the gun when a shell burst close by killing two and wounding four… he died immediately. He was ever ready to do anything and was an asset to the battery… (he) was loved and respected by all.” Cecil C. Davies wrote, “We understand everything possible was done to save him as the Dressing Station was close at hand and from the time he was so unfortunately hit up to his death we understand he suffered no pain but was unconscious.” The Revd H. Newman Davis wrote, “I buried him by the side of his mate [J. W. Lythgoe – they are still side by side at Souchez], who was killed at the same time, in a very nice cemetery not so very far from his battery.” It is fortunate that these letters have been preserved and they speak of Tom’s bravery and the respect in which he was held by his fellows. His cap badge was enclosed in one of these letters sent to his widow and she received his few sad belongings when the war was over.

A photograph of him in military uniform and the news of his death was noted in both the Reporter and the North Cheshire Herald for Saturday, August 25th 1917. He is commemorated on the war memorial in the Lady Chapel of St Anne’s Church, on one of the wooden memorial plaques in Hyde Town Hall and on the cenotaph in Victoria Park, Denton. He is also remembered on Emma's monumental gravestone in Denton Cemetery. On the centenary of his death he was remembered with pride and thanksgiving by members of his family who gathered around this gravestone while the story of his death was recounted and the Last Post was played.