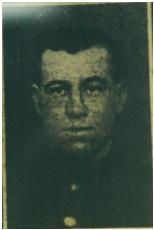 The son of Annie and William O’Kell  and born in Runcorn. He was married to Harriet Jones and they had two sons, Peter born in 1907 and James born on 1910 and a daughter Martha. There was a 4th child Alice on the 1911 census but no other information can be found on her.  He was a well known footballer playing in the local first and second teams and worked at the Salt Union works at Weston Point, Runcorn.

He enlisted in January 1917 going to France in May.

The news of his death was conveyed to his wife by a friend and read as follows:

“You can tell Jack and Mrs Findlow next door that their nephew, Davidson, from Speakman Street ( not William Davidson) who joined the same Battalion as I am in, on the 4th June, as did Peter O’Kell. We had a big battle here and Davidson has come out quite safe, but I am sorry to have to tell you that Peter O’Kell got killed with a shell on the 9th. Probably this will be the first news of his death. Kindly break the news to his relatives as easy as possible, and please give them my sincere sympathy over their sad loss. Peter’s last words were “I did not know it would be like this”.

On the date he was killed the 13th Battalion were in action during the Battle of Messines.

Peter has no known grave, as is commemorated on the Ypres (Menin Gate) Memorial , Belgium, Panel 22.

He is also commemorated on the Runcorn War Memorial on Greenway Road.

Compiled by Graeme Ainsworth with assistance from Percy Dunbavand