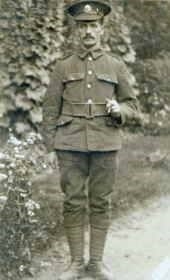 Ezra had been born in Stockport and, by the time of the 1901 Census, was working as a general labourer. Later he married and lived with his wife, Emily and three children at 9 Chatham Street, however in 1911  he was living at 10 Mahood Street, Stockport.
At the time he enlisted, in mid-1915, he was working at the Chestergate Hat Manufacturing Ltd, he went to France in 1916. On 26 September 1916, as support for a major attack on the Thiepval Ridge (in the heart of the Somme battlefield), the Cheshires were ordered to conduct a raid on the enemy trench opposite their position near to Beaumont-Hamel. The Regimental History records that "Under cover of a barrage, they crossed no man's land at 9pm and rushed the enemy trenches. A fierce fight ensued. While the covering party on the enemy parapet kept the enemy at bay in face of heavy machine gun fire, another party attempted to clear the enemy trenches. The trenches were found to be blocked with "knife rests" and loose wire. All the German garrison were killed or driven off and our men withdrew with some difficulty with a loss of 12 men." An officer later wrote "He was on the front of his party who forced their way over the enemy trenches where they were subjected to very heavy machine gun fire and it was a bullet from one of these guns that hit him and killed him instantly. Your husband was a brave man and his coolness in danger was a great encouragement to the other men. The Regiment has lost a fine soldier.” Ezra may have been buried but, after the war, his grave could not be found, he is commemorated on the nearby Thiepval Memorial to the Missing. 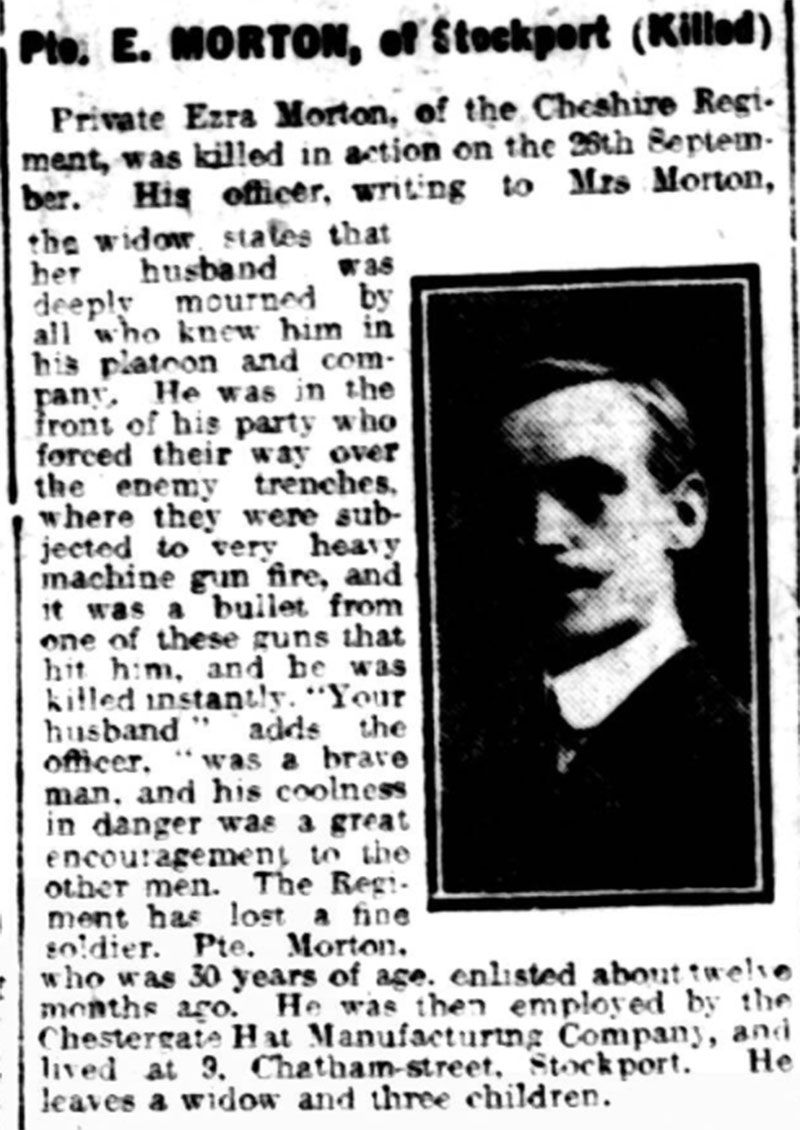 Trench raids became part of trench life, the aim was to obtain intelligence, kill and destroy as much as possible. The possibility of a trench raid ensured the other side had to always be alert adding to the stressful nature of trench life. The battalion war diary for the 1/6th Cheshires states.
Beaumont Hamel Trenches 26th September 1916.

Generally quiet during the day. At 9pm a raid was made on the hostile trenches. The parties got out safely into NO MANS LAND under the cover of our artillery barrage and on the same lifting an officer and a number of men rushed the enemy trenches. These were found to be full of knife rests and wire and they had considerable difficulty in extracting themselves. During this time the covering party had taken positions on the enemy parapet and although exposed to heavy cross machine gun fire and grenades, they effectively kept the enemy at bay by throwing grenades until the party in the trench had freed themselves and got out again.

2 OR Killed 7 OR Wounded 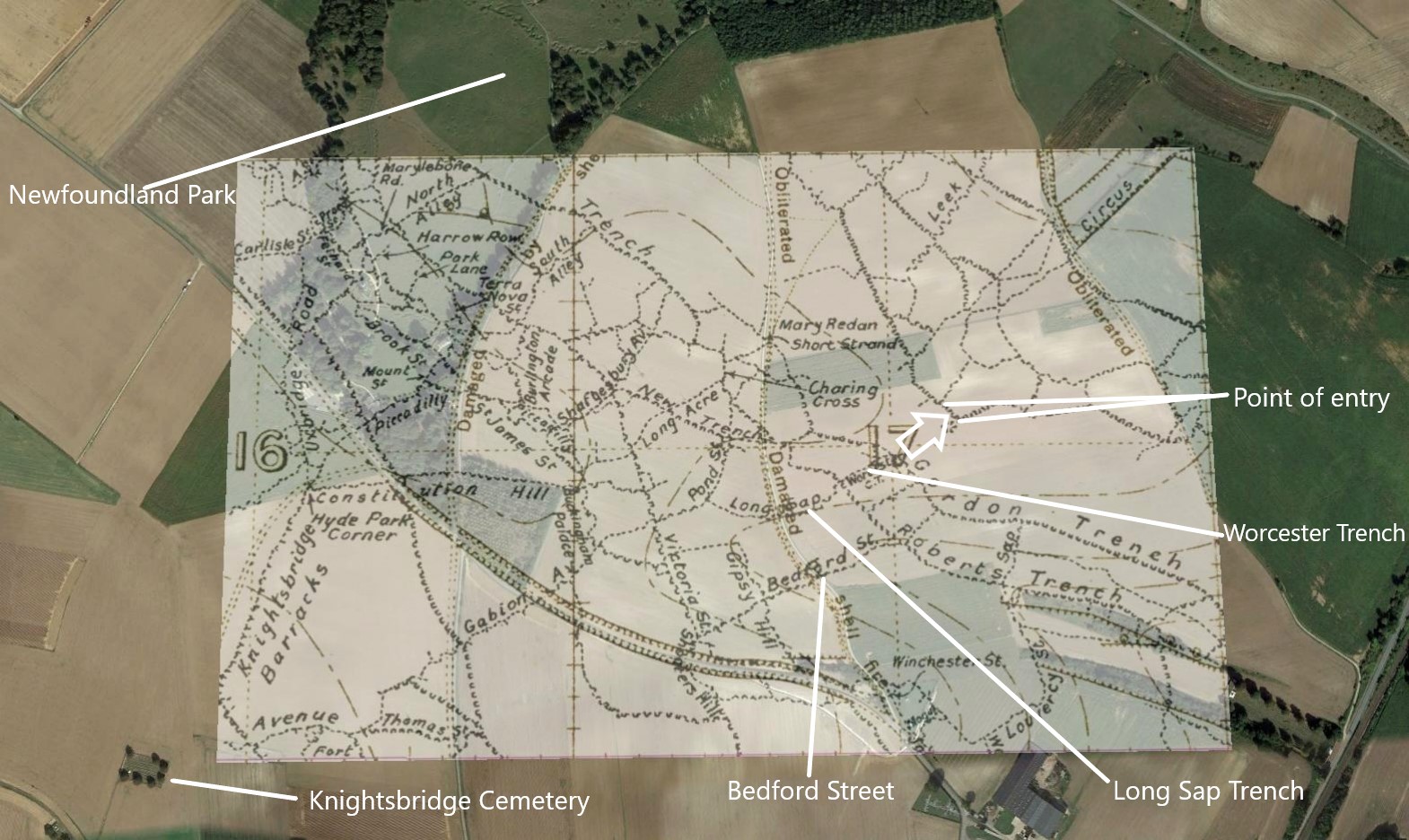 The diary also has the order and plan of the raid, using trench maps it is possible to locate the exact area.

To enter the hostile trenches between points Q.17. B.21. & Q.17.B.12. To capture and kill as many of the enemy as possible. To secure identification if possible. To lower the morale of the enemy.

At zero – all the party in the front line by LONG SAP ready to move out.

At 0.5 (a) party moves into NO MANS LAND, moving in files, three deep, and one yard apart towards the hostile trench.

At 0.6 (b) party moves into NO MANS LAND – 1 NCO and 4 men covering each front party. 1 NC and 4 men keeping connection with the front and flank parties.  When the raiding party enters the trench the (b) party forms flank and protection in NO MANS LAND and connections at point of entrance.

At 0.20. Artillery will fire two salvoes percussion shrapnel on Q.17.b.13. This will be the signal for the raiders to rush the German trenches at points of entry.

Rifle and bayonet: two bombs in each pocket, bombers carry ten bombs. 12 pairs of wire cutters and wire gloves to be carried. No documents of any kind to be carried.

Advanced dressing stations at No.1 Sap, Gordon Trench. Stretcher bearers to be in Gordon trench.

To battalion headquarters at KNIGHTSBRIDGE as quickly as possible.

A small white patch on the back.

The following trenches will be used for up and down trenches

Posts will be established for checking in at the top of LONG SAP and WORCESTER STREET.

Advanced telephone station at POND STREET. Thence to battalion headquarters  at KNIGHTSBRIDGE by wire and runners.