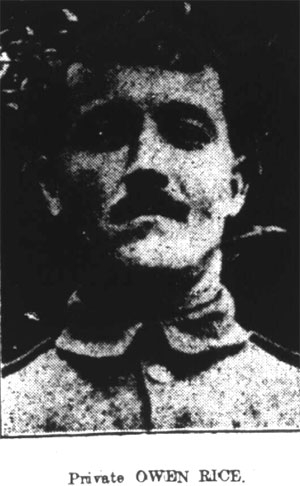 Official news of the death of Private Owen Rice, of the Cheshires, has been received by his wife, 5 Banning Street, Birkenhead.

Pte. Rice had been in France six months and died of wounds in a French hospital. His wife received the news of his death in a letter from a Catholic Chaplain and the sister of the hospital. Before joining the army Pte. Rice was a well-known figure at the Birkenhead Docks, where he had been a worker for many years. A letter of sympathy from the King and Queen has been received by Mrs. Rice, she is left with two children.