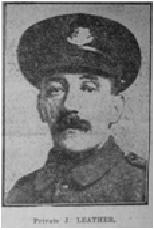 James Arthur Leather was  born in 1889  to Peter and Agnes Leather of 2 Sea View Avenue, Liscard. He had two sisters, Adelaide and Evelyn.  He attended St Marys school and  was employed as a cotton merchant salesman for Longmore Bros of Liverpool. He joined up in November 1915 at the age of 26 as Reg No 35248. Initially he was posted to  the 14th Cheshire's, which was a training battalion based in Rhyl and Whitchurch.
On the 19th July 1916 James was sent to France arriving in Rouen  where he was posted to the 13th Cheshire's “Wirral Pals”on 27th July.
He saw his first action very early on and was injured on the 23rd October being received at 76 First Aid station with two injuries. During this period the 13th Cheshire's where engaged in fighting at Ancre Heights, north of Thiepval.
The initial assault was done on the 9th October by the 10th Cheshire's, who captured the Stuff redoubt, this action saw them launch an attack after an intense artillery barrage. They quickly got over no mans land and captured the first line of trenches before the Germans could mount their machine guns.  Once this trench system was under the allied control, the next trench system, the Regina Trench was  attacked by the 25th and 39th Divisions on 21st and 22nd October. Crookenden states that the 13th took their objectives without much difficulty, thou the casualties were severe , 12 officers and 198 men. James injury was a GSW to the back of his head, ungs and right arm. He was admitted to 13 General Hospital at Boulogne and sent back to the UK. He spent 16 days in hospital.
He then embarked for BEF on the 25th May 1917, arriving the next day and being posted to 11th then 1st Cheshire's. The next injury he received was on 8th October, nearly a year since his last one.
During this period, the 1st where in reserve in Sanctuary Wood receiving daily casualties from shelling, James injuries sustained here where a GSW  in the forehead and legs, an article in the local paper states he was also injured in both arms.
He was admitted to first No 64 First Aid station, then No 4 Casualty Clearing station then finally sent to the UK on 17th October.  At Edinburgh war hospital, his injuries are stated as being GSW left knee, right fore arm.

He stayed here for some time, finally being discharged on 2nd Feb 1918. For now he was posted to the 3rd Cheshire's based at Seaton Carew near West Hartlepool. Here he seems to have had his first potential disciplinary issue, in that he had broken his army issued glasses and needed them repairing. It was requested if a Court of Inquiry was needed.
For a while James was left in the 3rd Cheshire's. 1918 saw the Spring German offensive and James was recalled to France on 8th June. He was posted to the 15th Cheshire's on 21st June, this was to be his last battalion, the newspaper report  states that he was now lame.

The Cheshire Bantams by Stephen McGreal has the 15th leaving the training ground of Swan Chateau and marching to  Molenhoek. On the 11th October James received a GSW to his abdomen and died at 10 casualty clearing station on 14th October 1918.  I suspect he was involved in a patrol on the 12th October that sustained a number of casualties, James being one of them. He is buried in Lijsenthoek cemetery, which is located  east of Ypres just south of Poperinge. This was a large military hospital during the war and has just under 10,000 burials.