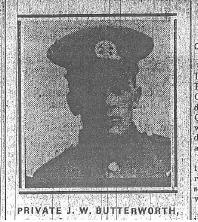 John was born in Runcorn and was the son of Frances (Died 1927 age 72) and the late Charles Butterworth (A waterman who died in 1908). He married Harriet Lowe in 1915, before he was posted to France. The 1911 census has Harriet working as a domsetic  servant for the Clark family, whose father was a ship broker, they lived at West Dale, Weston Road. Runcorn.

As a boy he was a member of the Mill Brow Sunday School, and later a playing member of the White Star football team. He was also a member of the Rose of Sharon Lodge Oddfellows. He was employed at the Vacuum Plant at the Salt Union works at Weston Point as a Salt Rammer.

His service records show that he initially joined up in Warrington on 27th February 1917 joining the South Lancashire Regiment, No 40238. Coincedently, W Cavanagh a fellow worker from the salt Union works also joined the South Lancashire regiment No 40237, he died in 1918. John was 5ft 2inches in height, aged 24 years 11 months. He landed in France on the 23rd June 1917 and was transferred over to the 13th Cheshires on 9th July 1917.

He was killed by a sniper, his death being instantaneous.

He is buried in Cambrin military cemetery, Pas de Calais, France, grave ref L 47. On his headstone is the following inscription.

The Cemetery is located behind the main road, surrounded by fields, a very peaceful spot.

His wife received a pension from 13th May 1918 and received his Victory and British medal.

He is also commemorated on the Runcorn War Memorial on Greenway Road.