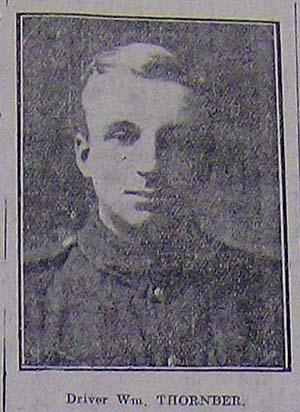 Mrs. Thornber of 152 Oliver street, Birkenhead is the recipient of information that her husband Driver Wm. Thornber of the Royal Engineers died of malaria in the 27th General Hospital, Egypt on December 9th last. Driver Wm. Thornber was formerly employed at David Evans, builders of Upton Road and joined the forces shortly after the outbreak of hostilities. He was drafted to Egypt, in July 1915. He was 27 years of age. A widow and two little girls are left to mourn his loss. He has two other brothers also serving, one in France and the other in Mesopotamia.