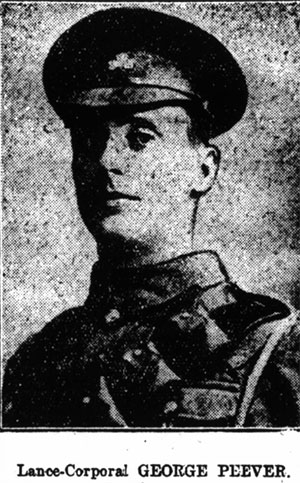 Death of an Oxton Soldier.

Word has been received of the death of Lance Corporal George Peever, fourth son of the late Mr. John Peever and Mrs Peever, of Rose Mount, Oxton, who died of dysentery at Abbassa, Egypt on Nov. 20. Lance Corporal Peever belonged to the South Irish Horse Regt. Attached to the Dorset Yeomanry, and had been on active service for 12 months, and took part in delivery of Palestine under General Allenby. Before joining, which he did quite voluntarily, he was for several years employed by the La Comedie Anglaise Co., Ireland.

Mrs. Peever’s sons have done well in serving their King and country, their photographs having appeared in the “News”  upon several occasions.

These are the sons of Mrs. Peever and the late John Peever, 35 Rose Mount, Oxton.

Private Edward Peever, Cheshire Regiment, in France, once wounded. Prior to joining he was a timekeeper, Dock Board Office, Liverpool.

Third A.M. William Peever, R.F.C. in training. Prior to joining he was chief clerk to Mr. F.A. Greer, K.C., London.

Lance Corporal George Peever, South Irish Horse Regt., in Egypt. Prior to joining he was an actor in La Comedie Anglaise, Co. Ireland.

Private Herbert Peever, Kings Liverpool Regt. Is in France, prior to joining he was employed by Hill, Dickenson and Co. solicitors, Liverpool.

Wireless Operator Harry Peever, R.F.C., in France. Prior to joining he was a member of the Marconi Co.

Frederick Peever, wireless operator on H.M.T ----, was at the landing of the first troops at the Dardanelles. He is at present serving at sea.