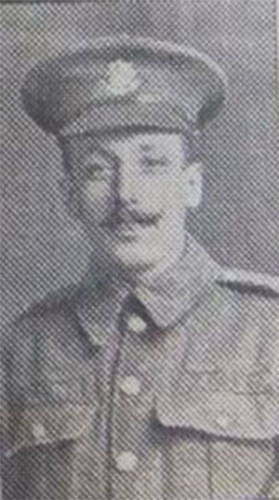 In the autumn of 1893, Thomas Gregory married Annie Clent at Christ Church, Heaton Norris. A few weeks later, Wilfred's birth was registered at Stockport. By the time of the Great War, the family was living at 94 Short Street, Heaton Norris (and by the early 1920, Mr & Mrs Gregory had moved nearby to 79 Belmont Street. Wilfred worked for the London and North Western Railway Ltd, as a booking clerk at Denton Station and he is commemorated in the Company's Roll of Honour (which gives his rank as sergeant). Wilfred's service number indicates that he enlisted into the army in August or September 1914. After training, the newly formed Battalion went overseas on 18 June 1915. On 25 September 1915, the British Army was about to launch the attack that would become known as the Battle of Loos. 20 kilometres to the south, Wilfred and his comrades, including Sydney Bruckshaw, were in trenches 500 yards north east of the village of Givenchy. The Cheshire’s and other battalions in the area were expected to launch a diversionary attack in this sector. The Cheshire’s would follow behind the 9th Battalion, Welsh Regiment and support them. At 6.35am, "B" and "C" Companies advanced down the trench system towards the front line. "C" Company found their way blocked and had to get out of the trench and advance over the open ground. The Battalion's War Diary records that, by 6.50, "B" company had reached the front line. Lieutenant Watts ran forward to find the men of the Welsh Regiment. "When found, they said their officers were down and did not know what to do. He found Captain Hughes dead and Captain McKenzie wounded. Watts asked if he should take over Welsh. McKenzie said "yes" then called out "Forward the Welsh and the Cheshire’s". Lieutenant Watts signalled forward and was wounded. “Captain Johnson, commanding "B" Company, later reported "I led the Company down the communication trench. At front trench, there was no sign of gas or smoke. I saw 9/Welsh going over the parapet......Later, I had a good look round with my glasses over the parapet and saw dead and wounded men. No-one was standing up........I sent an orderly to Officer Commanding 9/Welsh asking for information and received message that OC 9/Welsh does not wish the Cheshire’s to advance and is trying to get his companies back. I withdrew 6 & 7 platoons and left No. 5 out in case of possible counterattack. “The chaos of the attack is further confirmed in the concluding entries in the Battalion's War Diary for the day. It notes that the Cheshire’s took over the front line from the Welsh at about 11.30am. The smoke and poison gas projected at the German trenches had not reached the enemy and the artillery covering fire had been ineffectual. "Reports from men who reached within 50 yards of enemy's wire say that it was little cut." The Diary entry ends "Morale - our men hoped the Germans would counter-attack so they might have their revenge."