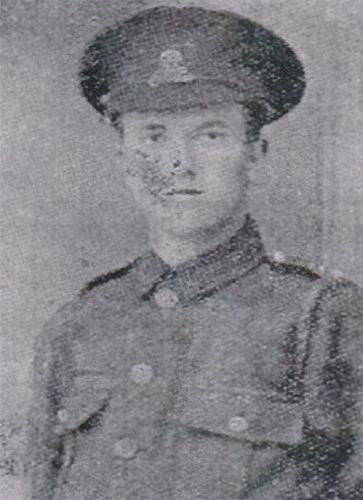 Private Ernest Gregory enlisted in the 1st Battalion, The Lancashire Fusiliers which were in the 86th Brigade, 29th Division, on the 2nd of January 1915. On the 16th of March 1915, the Battalion embarked from Avonmouth via Malta to Egypt. They embarked from Egypt on the H.M.S. Euryalus on the same day, landing at Cape Helles, Gallipoli on the 25th of April. At 04:00 hours they transferred to the ships boats and rowed to their landing place between Cape Helles and Tekke Burn. At 05:30 hours they landed under heavy machine gun and rifle fire from all directions, this caused heavy casualties. Several men were hit while still in the boats or in the water before getting ashore. Barbed wire entanglements caused serious problems at the water's edge. By 09:00 hours the Battalion was in possession of Hill 114 and the adjacent Redoubts. "C" Company had taken up a position north of Hill 114, and "D" Company just south of the Hill. During the night the Battalion suffered heavy gun fire on their left flank. On the morning of the 25th, the firing continued all morning, "A" and B Companies who had been to Hill 138 were collected and the Battalion re-organised. The 27th of April began with heavy firing on the left flank, but by 08:00 hours, the Turks had withdrawn, and all was quiet, Patrols were sent in front of the line for 1 mile. At 16:00 hours the Battalion was put in reserve with the Royal Fusiliers and the Royal Dublin Fusiliers. After Scimitar Hill, the Battalion settled down to a routine similar to that of the Western Front, (Trench Life) often with greater discomfort. Mining was carried out by both sides. During the night of the 13th/ 14th of October, two Turkish mines were exploded in the area of the 1/7th Battalion causing eight casualties and temporarily entombing several others. On the 14th the British exploded two mines against Turkish galleries in the Battalion's area. At 23:20 hours on the 29th of October the same Battalion was again involved in mining activity when the sector they were holding on both sides of Gully Ravine was subjected to a mine explosion near to Cawley's Crater, slightly damaging the Battalion's trenches and burying five men. During the following night a mine shaft in the Battalion's line was blown in by the explosion of a Turkish mine. The unit showed its resentment by heavily bombing the enemy throughout the night. The conditions on the Peninsula were deplorable with the flies and lice, insanitation ad the monotonous and unsuitable food which caused much dysentery, jaundice, septic sores and other illnesses. The number of soldiers dropped so severely that in October the 1/5th and 1/8th Battalions temporarily amalgamated. Nature had not, however, exhausted all her ammunition in her fight against the troops. On the 15th of November there came a violent storm with deluges of rain. Bales of hay, sacks of bread and drowned mules were washed away down Gully Ravine into the sea. All the Battalions of the Regiment on the Peninsula felt the storm, though the 1/5th suffered the most. A worst storm during the night of the 26th/27th of November when Gully Ravine quickly became a bed of deep mud and almost impossible to cross. But though the Territorial Battalions recorded bitter cold, the sloping ground of their Helles sector made their ordeal much lighter than that endured by the 1st Battalion on the flat ground of the Suvla front, where no re vetting material was available to keep the trench sides up. The Battalion was in the line near Dublin Castle, two thousand yards north north east of the Salt Lake. Two Hours after the storm broke the water had flooded all its trenches, coming in as though it was a tidal wave". Several men were drowned, and much equipment was washed away. The water subsided to an average depth of four feet early in the following morning, but the men could do little except lie huddled behind the remains of the parapet of their trench and throw up enough cover to protect them somewhat from shrapnel fire. Parties had to be given leave to retire from the lines as they were too exhausted to work or fight. Several failed to reach the hospital and died of exhaustion on the way. A bitter north east wind blew throughout the day, causing further deaths from exposure. Towards the evening of the 27th of November, the weather grew worse and a snow blizzard set in and continued all night and most of the next day. It had the merit of screening the movements of parties who took advantage of an order issued by the Brigadier that all men not fit to fire a rifle were to be sent back to field ambulances and that the whole Brigade would abandon all but key positions. Another advantage brought by the storm was that not a fly survived it. The 1st Battalion lost about 20 men drowned and at least 19 frozen to death, along with 525 evacuated to hospital suffering from the effects of exposure. Private Ernest Gregory while serving with the 1st Battalion, the Lancashire Fusiliers was reportedly killed in action on the 27th of November 1915 and it is most likely during these events, as no other action was reported at that time.

Extract from the Congleton Chronicle 1916.

The official news of the death of Private Ernest Gregory of the Lancashire Fusiliers was received on Saturday last by his mother who resides off Canal Street, Congleton. It is some sixteen months since his mother received a letter from him and a month later, in consequence of vague rumours, she wrote to the War Office, with a view to receiving some news concerning him, enclosing the last letter the dead soldier was destined to write, but the Officer in Charge of Records replied that no further information concerning him had been received since he was reported missing. After months of waiting the following official notification was received on Saturday last.

It is my painful duty to inform you that no further news having been received relative to Private Ernest Gregory of the 1st Battalion The Lancashire Fusiliers who has been missing since the 27th of November 1915, the Army Council have been regretfully constrained to conclude that he is dead and that his death took place on the 27th of November 1915. I am to express to you the sympathy of the Army Council with you in your loss. Accompanying the notification was a letter of sympathy from His Majesty and the Queen (through the Secretary of War.)

Private Gregory was but a boy, scarcely out of his teens, yet he stood the shock of arms with a dour determination that elicited the admiration alike of his superior officers and his comrades. The last letter he was destined to write home was full of good humour and hopes of coming conquests, a replica of the letters he had previously sent to those dear to him. His death robbed the platoon of a staunch comrade, one who was held in the highest esteem, loved and admired by all. He is lost to those at home, but surely their loss is his gain, for a more glorious death no one could hope for to fight for the freedom of others, which calls for the greatest of all sacrifices. He was a true, devoted soldier, never a complaint left his lips and his duty was his first consideration. For nearly two hundred years, the splendid regiment to which he belonged has met the foe to the slogan of Remember Minden and it is not to be wondered at, for it was at Minden that the famous Fusiliers were the mainstay of the six regiments of infantry who withstood the onslaught of 10,000 French Cavalry, and converted failure into success, and from that day to the present the inspiring slogan has been heard wherever hard fighting has been going on. During the present war the boys of the Red Rose have added page after page of glorious deeds to an already wonderful record. No wonder Private Gregory was proud to belong to such a regiment. In his last letter he wrote, he spoke of his experiences in the trenches with the Minden Boys adding prophetically I don't think I shall be home for Christmas. However, consolation was vouchsafed him in the knowledge that he was doing his bit for King and Country.

The Cheshire Roll of Honour would like to thank John and Christopher Pullen for this information on Ernest.