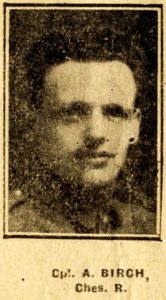 Albert Birch was born on 14th February 1892, the son of widow Julia Birch (nee Brickhill or Brickell) of 19 Blackshaw Street, Macclesfield. From 1895 until September 1902, Albert was educated at St John’s Church of England School, by which time he had passed standard grade IV, and he later attended Lord Street School.

By 1911, the family had moved to 88 Chester Road, where Albert lived with his mother and three siblings: Edith, Edward and Gerty. At that time Albert was employed as an apprentice hairdresser by Mr Poynton, a hairdresser of Chestergate, Macclesfield, and he later found employment as a railway porter at Warrington. Albert attended the Spiritualist Free Church in Cumberland Street.

Albert attested in Macclesfield on 3rd September 1914. Army medical records show that he was 5 feet 6½ inches tall, weighed 130lbs, with a chest measurement of thirty one inches; his eyes and hair were brown, and he was of the Baptist faith.

Albert was posted for training on 11th October 1914 and promoted first to Lance Corporal on 9th June 1915, and then to Acting Corporal on 30th June. He departed England’s shores from Folkestone with the British Expeditionary Force on 19th July 1915, and was in charge of a machine gun section when he was killed in action on 22nd September 1915 at the age of 23.

His death was reported in the Macclesfield Times on 1st October 1915:

Information has reached Macclesfield during the week that Corporal Albert Birch, 9th Cheshire Regiment (machine-gun section), younger son of Mrs Birch, Chatham Street, Macclesfield, has been killed in action in France. The intimation was contained in a letter from the deceased's brother Edward, who is a Corporal in the same regiment. Writing on the 23rd of September to Mrs Fearn, Rainow Road, Corporal Edward Birch said:

'This morning it is my painful and sorrowful duty to inform you that last night in the trenches, at about 6 o'clock, my brother Albert paid the penalty with his life for his patriotism and loyalty to his King and Country. My brother was in the second line (supports), when he received a bullet in his neck - possibly the work of a sniper - which passed through the main artery, thus causing instant death. Before the burial, which took place at 9.30pm, I examined Albert to be sure he had received every attention, and I was satisfied that nothing more could have possibly been done for him. From the nature of the wounds I knew he could not have suffered.

His remains were laid to rest in a tiny 'soldiers cemetery' at this place, Festubert. Bert was buried with the fullest military honours permitted on active service - that of six men of equivalent rank (including our two special friends), presenting arms, with a few words of sympathy after the burial service had been read by the Wesleyan Chaplain of our Brigade. The doctor attended the funeral with me, and has given me a day off today, in order that I could ride to the nearest town to obtain flowers, and also some grass seed, which I intend planting on the grave before we leave. A neat little wooden cross, giving his name, number, rank, regiment and date of death has been erected. I can only look on his death as a glorious and noble sacrifice in a great cause for right and honour, and I would ask that you all try and think of it in the same light, as I can guess how keenly you will feel his loss. I have written to mother today. I only hope the news will not have any serious effect, though I know from letters received that she has been ill for some time.'

The late Corporal Birch was 24 years of age and was educated at Lord Street School. He was apprenticed to the hairdressing business under Mr J H Fearn, Chestergate, Macclesfield, and about five years ago took up employment on the railway at Warrington. The deceased attended the Spiritualist Free Church, Cumberland Street. He enlisted in the New Army shortly after the outbreak of the war along with his brother. Corporal Albert Birch was one of the 'Macclesfield Chums', the others being Messrs Philip Gaskell, Edward Birch, Corbishley and Shaw.

In Macclesfield, Corporal Albert Birch is commemorated on the Park Green, Town Hall, St Michael's Church, and the Spiritualist Church war memorials, and on the Ancient Order of Foresters roll of honour.

Brother of Lance-Corporal Edward Birch, who also served with the 9th Cheshire Regiment and survived the war.