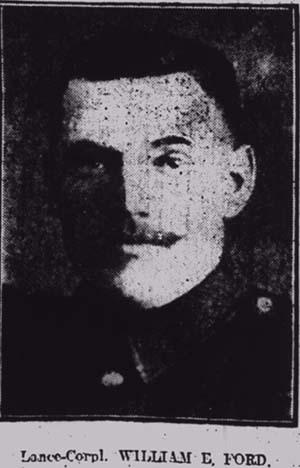 DIED AFTER ADMITTANCE TO HOSPITAL

Lance-Corporal William E. Ford, of the 13th (Wirral) Battalion, died on the 15th January in the No. 8 Casualty Clearing Station, France, as the result of wounds in the head received in action. He was 27 years of age, and formerly lived at 158, Beckwith Street. He leaves a widow and two children, whose present address is 13, Banning Street. He was a warehouseman for over four years at Messrs. Lever Bros. Port Sunlight, and joined No 3 Co. of the 13th Cheshires, on their formation, and had been in France since the beginning of September. Mrs. Ford has received the following letter from Canon R. A. Adderley, C.F from No. 8 Clearing Hospital Station dated 20th January, 1916 :-

“Your husband, Lance-Corporal. W Ford was admitted here on Saturday afternoon last, and I regret to say he died very shortly after from wounds in the head. I would have written sooner to tell you, but did not know your address. I wrote to the Commanding Officer of his Battalion and got your address from him this morning. Your husband was quite unconscious when admitted and only lived 20 minutes. Please accept my sincere sympathy with you in your sad bereavement. I buried him in Bailluel Cemetery on Monday.”

Lance-Corporal Ford has an elder brother in the Lancashire Fusiliers.