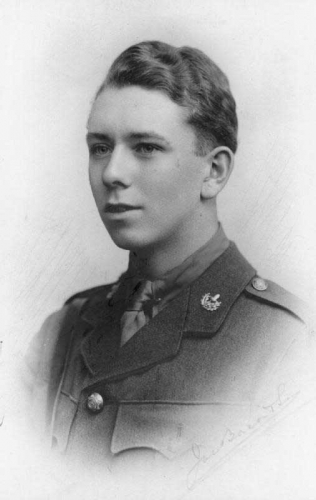 Kenneth George Haslam Ford was the eldest surviving son of the Venerable Archdeacon George Adam Ford and his wife Ellen Isabella, George Adam was the Rector of Babington, born in Lincoln on the 12 November 1895 Kenneth was educated at South Lodge School Lowestoft, and then at Marlborough College, for a period of time he was a private in the Inns of Court O.T.C.

On the 6th August 1914 he enlisted in the Royal Field Artillery but was given a commission as 2nd Lieutenant in the Cheshire Regiment on the 22nd September, he was promoted to Lieutenant on the 24th November and was appointed C.O of a machine gun section the same month.

On the 25th September 1915 George and the 11th Battalion entrained at Farnborough station and at 6pm that evening they sailed from Southampton to Le Havre on the transport ship Mona Queen, within a week they were in the trenches.

On the 28th November 1915 the battalion relived the 8th Bn South Lancashire Regiment in the line, two days later at 12:45pm Kenneth was shot by a sniper the war diary for the day reads:

12:45pm Lieut Ford, Machine Gun Officer whilst observing at PICKET HOUSE, was severely wounded in the head by an enemy sniper, who put three shots in quick succession through a loop hole in the wall. Lieut Ford was hit by the first shot – he was conveyed with all possible speed to BAILLEUL hospital, but unfortunately succumbed to his wound during the night.

His first commanding officer Col. J R Dyas wrote: “Your gallant son was one of the most promising officers of my late battalion, the 11th Cheshire’s. He had served with me for nearly a year, when, to my great regret I was moved to another battalion and I looked forward to seeing his early promotion. I knew that he never would lose an opportunity of distinguishing himself. He will be a great loss to the regiment.” His second commanding officer Lt-Col R.L Aspinall D.S.O. wrote: “Up to the time of my meeting with an accident and breaking my leg on the 24th October I was in command of the 11th Cheshire Regiment, and I hope you will allow me to express my very deep sympathy at the loss of your gallant son, the news of which, in last Sundays paper affected me deeply. I am sure that my successor, Sir Henry Lennard, will have written to you his appreciation of your boy, but I think you would like to hear from another pen what really splendid young soldier he was, and what a sad gap he will leave in the battalion. The very fact of his having been selected as Machine Gun Officer is a proof of his ability, and I can assure you, without disparagement to others, he was the smartest subaltern in the battalion, in spite of his being, to the best of my belief, the youngest. While we were on our line in Ploegsteert Wood I saw a great deal of him, both from the nature of his duties and from the fact of his being a member of our headquarters mess. I so well remember his reappearance at meals, just before I came away, after eighteen consecutive days in the trenches with his machine guns. You can imagine that this was a pretty wearing experience; but his courage, keenness and good humour never failed him, nor was there with him the least suspicion of a grumble.” Lt-Col. Sir Henry Lennard also wrote: I need not say how much we shall all feel his loss. His machine gun men were devoted to him, and he was very popular with all ranks. I have only been with the regiment myself for a short time, but in that time, I had learnt to like your son very much. He was always cheery, plucky, and made light of everything, and was a very promising officer. All his brother officers feel it very much and wish their sincere sympathy to be conveyed to you. He laid down his life like a gallant gentleman for his country, doing his duty cheerfully and well to the last minute.” Captain Graham Satow, Brigade Machine Gun Officer wrote: “he was the keenest Machine Gun Officer in the Brigade, and, indeed, his keenness las lost us his services for ever. He was conducting a reconnaissance in the front-line trenches, trying to locate a German emplacement. He died through carrying out a dangerous duty, like the fearless lad he was. All honour to you and him for it.”