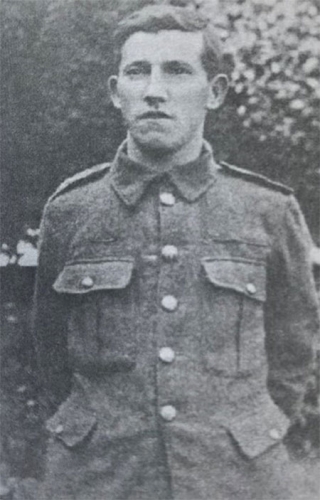 Born in 1892 at Alderley Edge, Gilbert was the eldest son of John and Mary Ann Davies of 21 Chapel Street. In 1911 Gilbert was serving his time as an apprentice joiner with Mr Massey. He was a member of the Church Lads Brigade and also belonged to the Church Band, he was also an enthusiastic footballer.

He enlisted at Macclesfield and was drafted with the Mediterranean Expeditionary Force (M.E.F.) to the Dardanelles, landing at Suvla Bay, Gallipoli 8th August 1915. He died of wounds 1st December 1915 at the 2nd Field Ambulance, Suvla Bay. His widow, Edith and one child received £3 10 shillings War Gratuity.


His brother Albert Vincent Davies was killed in action in 1917.


The Cheshire Roll of Honour would like to thank H.A.G. Carlisle for this information on Gilbert.