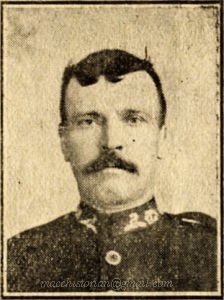 Henry Chadwick was baptised on 15th May 1864 at St George's Church, Sutton, south Macclesfield, the son of Mary Ann and Benjamin Chadwick, a powerloom weaver of Macclesfield. In 1871, Henry, aged seven, was living at 3 Duke Street with his parents and younger sister Mary, aged 5.

Henry was educated at St George's Day School and was well-known in the town as a keen footballer.

It is not known what happened to Henry's wife or their daughter Mary Elizabeth, but Henry joined the Seaforth Highlanders in 1898 and served for a total of sixteen years during the Sudan and South Africa wars, and as a reservist when he returned to Macclesfield. Meanwhile, in 1901 two of Henry's daughters were living in Macclesfield - Lizzie Ann with his married sister, Lizzie Ann Adams, and Florrie with his unmarried sister Mary Hannah Chadwick (who married Samuel Moores in 1914). The two girls were baptised at St George's Church, Sutton, south Macclesfield on 22nd July 1900.

By 1911, Henry had found employment in Macclesfield as a cotton spinner, and was living at 1 Half Street with his widowed mother (aged 74), his daughters Lizzie Ann (21) and Florrie Chadwick (19), and baby Florence Chadwick (6 months).

Henry Chadwick was an old soldier, having served in the Sudan (1897-9) and South African Campaigns with the Seaforth Highlanders, and on the outbreak of war he re-enlisted in Stockport with the Cheshire Regiment. He was drafted to Gallipoli on 26th June 1915, but contracted dysentery in August 1915 and was repatriated to England. After his recovery, Henry remained in the UK, attached to the 3rd South Lancashire Regt and stationed at Thornton Camp, near Crosby, Lancashire. He later contracted pneumonia and was treated at The Military Hospital, Windy Knowe, Crosby, Lancashire, where he died on 22nd July 1916.

Henry's death was reported in the Macclesfield Times of 28 July 1916:

We regret to state that Private Henry Chadwick, 8th Cheshire Regt, son of the late Mr Benjamin Chadwick, Vincent Street, Macclesfield, has died from pneumonia in the Windyknowe Military Hospital, Blundellsands, near Liverpool. The deceased soldier was taken ill on Thursday week and passed away on Sunday. The late Private Chadwick was an old member of the army and came from a military family, his father having been engaged on garrison duty during the Crimean War. He was 52 years of age, and received his education at St George's Day School under Mr Thewlis. Enlisting in the Seaforth Highlanders eighteen years ago, he participated in many historic engagements. He served under Lord Roberts in India, and was with Kitchener in Egypt. At the conclusion of the Egyptian campaign, Private Chadwick returned home, and weeks later was called up for the South African War. He reported at the depot in Scotland and shortly afterwards was drafted to South Africa. Private Chadwick fought in the battle of Magersfontein and was present at the surrender of Cronje, being a member of the guard of honour to Lord Roberts. After the South African War Private Chadwick returned home and completed his time in the Reserve.

When the present war broke out, the deceased patriotically re-enlisted in the 8th Cheshires, and after a short time with the military police, he was drafted to the Dardanelles. He took part in that campaign, and was present at the evacuation of Suvla Bay. Subsequently the deceased contracted dysentery and was invalided home. He recovered and was stationed at Thornton Camp. Some time later pneumonia developed, with fatal results. While in hospital the deceased soldier was visited by his relatives, who speak in high terms of appreciation of the care and attention bestowed upon him. The late Private Chadwick was a well-known footballer, and was formerly in the employ of Mr Nehemiah Rathbone. His brother, Ben, is in training in England with the Royal Engineers.

His death was also reported in the Macclesfield Courier of 29 July 1916:

The funeral took place at the Macclesfield Cemetery on Wednesday afternoon of Private Henry Chadwick, from the house of his sister, Mrs Adams, 32 Cross Street, Sutton. Private Chadwick was 52 years of age, and for sixteen years he had served in the Seaforth Highlanders. He went through the whole of the South African campaign. When he left the army he was employed at the Higher Sutton quarries, and on the outbreak of the present war he joined the 8th Cheshires. He went to the Dardanelles and last August was sent home suffering from dysentery....

The floral tributes laid when the Macclesfield Park Green War Memorial was unveiled on 21st September 1921 included one with the words "In affectionate remembrance of Uncle Henry, from Ben Chadwick."

Brother of Ben Chadwick, who served in France as Sapper 188948 with the Royal Engineers and survived the war.