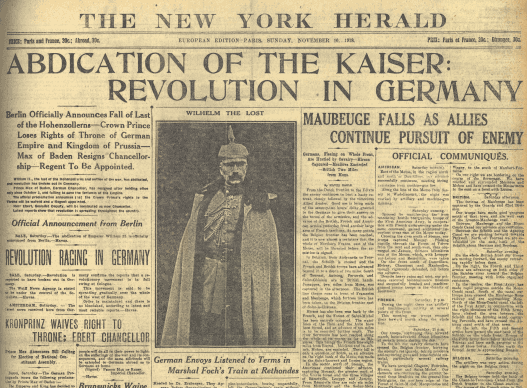 With Germany actively seeking an armistice and revolution threatening, calls for Kaiser Wilhelm II to abdicate grew in intensity. Wilhelm was himself deeply reluctant to make such a sacrifice, instead expressing a preference to lead his armies back into Germany from the Western Front. Upon being informed by his military advisers that the army could not be relied upon not to harm him Wilhelm abandoned the notion.

Wilhelm's abdication was announced by Chancellor Prince Max von Baden in a 9 November 1918 proclamation - before Wilhelm had in fact consented to abdicate (but after Social Democrat Philipp Scheidemann had announced the Kaiser's departure from the balcony of the Reichstag). Faced with a fait accompli Wilhelm formally abdicated and went into exile in Holland. His abdication proclamation (reproduced below) was formally published in Berlin on 30 November 1918.

Faced with public criticism over the nature of Wilhelm's abdication German Army Chief of Staff Paul von Hindenburg issued a statement on 20 March 1919 explaining the sequence of events and defending the Kaiser's role.

In the wake of the Kaiser's abdication his eldest son - Crown Prince Wilhelm - expressed a desire on 11 November 1918 - the date of the armistice - to be allowed to lead his army back home to Germany. His wish was, given the anti-royalist fervour of the moment, rejected out of hand by the government. He too went into exile in Holland, despatching a letter to Hindenburg following his arrival in which he explained and justified his position.

Having instigated the Kaiser's abdication Prince Max resigned, handing power to incoming Chancellor Friedrich Ebert who, in statements issued on 10 November and 17 November, appealed for public calm and reassured the German public that the incoming government would be "a government of the people".

I herewith renounce for all time claims to the throne of Prussia and to the German Imperial throne connected therewith.

At the same time I release all officials of the German Empire and of Prussia, as well as all officers, non-commissioned officers and men of the navy and of the Prussian army, as well as the troops of the federated states of Germany, from the oath of fidelity which they tendered to me as their Emperor, King and Commander-in-Chief.

I expect of them that until the re-establishment of order in the German Empire they shall render assistance to those in actual power in Germany, in protecting the German people from the threatening dangers of anarchy, famine, and foreign rule.

Proclaimed under our own hand and with the imperial seal attached.