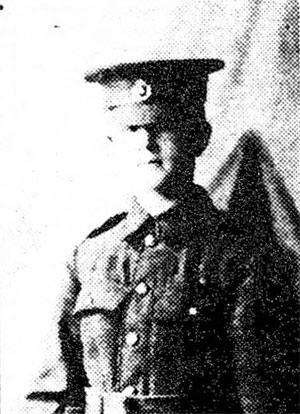 5, Egerton Street, Chester, of the Royal Marines, died of wounds.

Another Chester soldier has laid down his life for his King and Country. This week Mr. and Mrs. Peter Campion, of 5 Egerton Street, Chester, received the following communication: Royal Marine Barracks, Plymouth. 16th Jan. Regret to inform you. Pte. John Vincent Campion reported died of wounds on 13th Jan 1916. A letter also has been received from Mr. Balfour dated from the Admiralty, Whitehall, stating: The King commands me to assure you of the true sympathy of his Majesty and the Queen in your sorrow. Arthur James Balfour.

Campion was only 19 years of age, and he joined the Forces at Liverpool last July. Previously he was butcher’s assistant to Mr. Bithell, Christleton Road. His brother, Joe Campion of the 5th Cheshire’s, from whom letters have been published in our columns, since sending his last communication has been wounded and is now in hospital at Stoke on Trent.

The dead soldier formerly was an altar boy at St. Francis Roman Catholic Church, and on Sunday morning a requiem mass was said, and the prayers of the congregation were asked for. The Rev. Father Rudolph conducted the service.


Note: John’s date of death listed on the CWGC database is different that the newspaper article