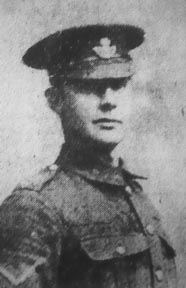 Herbert was born in Audlem, Cheshire in 1887, the third son of Thomas Bebbington, a van driver, and his wife Ann, of Willaston, Nantwich, Cheshire, Herbert had three sisters, Nellie, Lucy, and Alice, and six brothers, Harry, John, Joseph, Sydney, William and Charles.

The 1911 Census records Herbert living with his parents in Willaston, Nantwich, and working as a printer’s compositor. He was employed by Mr R Barrow Jones of Whitchurch as a printer and he enlisted in August 1914, he was promoted Corporal in January 1915 and full Sergeant in April 1915.

At 1a.m. the Battalion was in position in the trenches. At 3.50 a.m. intense bombardment, replied to immediately by the Germans. At 4.5a.m. Battalion in position for assault A & D Coys and two platoons of B with two machine guns and signallers in company column in front of our own lines. Two platoons of B & C Coys in support in the trenches. At 4.20 a.m. the assault took place and we penetrated to the German second line, but owing to the attack on our right not getting home, and the counter attack  enveloping our left flank the position became untenable and the Battalion was forced to reoccupied our original line of trenches at about 8.15 a.m. The Germans bombarded heavily until 1 p.m. and again from 9 p.m. until midnight. During the day the Battalion was reinforced by two platoons of the 6th Somerset Light Infantry and relieved in the trenches at 11.30 p.m. by the 6th Duke of Cornwall Light Infantry

Much sympathy is felt throughout Shropshire and its borders with relatives and friends of the many fallen heroes of the 5th Kings Shropshire Light Infantry. Amongst its number is Sergeant Herbert Bebbington, killed in action September 25th He was 27 years old and the son of Mr Thomas Bebbington of Crewe Road, Nantwich, but had been a resident of Whitchurch for a number of years, he volunteered in August 1914.