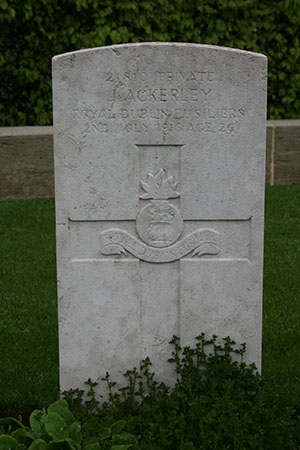 Joseph Ackerley was born in Timperley, Cheshire in 1890, one of four children born to John (a market gardener) and Emma Ackerley of Skelton Junction, Timperley. Joseph became an iron moulder.

He married Elisabeth Garner in 1913, and set up home at 40, Denmark Street, Altrincham. He enlisted at Altrincham recruiting office in 1914.

1st Battalion, Royal Dublin Fusiliers were in Madras when war broke out in August 1914. They returned to Britain landing at Plymouth on the 21st of December 1914. They went into to billets in Torquay, moving in January 1915 to Nuneaton to join 86th Brigade, 29th Division. On the 16th of March 1915 they sailed from Avonmouth for Gallipoli, via Alexandria and Mudros. They landed at Cape Helles on the 25th of April 1915. After suffering heavy casualties and on the 30th of April they merged with the 1st Royal Dublin Fusiliers forming a unit nick named the 'Dubsters'. They resumed their own identity on the 19th of May 1915. They were evacuated from Gallipoli in the first week of January, returning to Egypt. On the 13th of March 1916 they sailed from Port Said for Marseilles, travelling by train to concentrate in the area east of Pont Remy by the end of March. In July they went into action in the Battles of the Somme.

He died of wounds at the 87th Field Ambulance R.A.M.C. on the 2nd July 1916 from wounds received the previous day.

Reached our allotted position in trenches via BROADWAY at 01.00. W Coy (on right) and X Coy (on left) in ESSEX ST. with Y Coy (on right) and Z Coy (on left in 88th trench. Casualties during move 2 O.R. slightly wounded. Bombardment became more intense from 06.30 to 07.30 and at which hour the Attack was launched. The 2/Royal Fusiliers (on right) and 1/Lancashire Fusiliers (on left) advanced against the German 1st line trenches. In front of 1/Lancs a large mine was exploded by or near BEAUMONT HAMEL at 07.20. Immediately the 2RF and the 1/Lancs advanced we commenced move up to our front line trenches – W Coy with Y Coy in support up F St. + BROADWAY and X Coy with Z in support up BLOOMFIELD + 2nd AVENUE – ready to move out against the German second line system of trenches in BEAUMONT RIDGE S.E. of BEAUMONT HAMEL. The battalion was supposed to move out behind 2?RF by Companies and reform at STATION RD (also by Companies) ready for the assault of the enemy’s second line system; but this could only be done after the 2/RF had obtained their objective – the enemy front line system and this the 2/RF were unable to accomplish.

It was very difficult for Coys to move up to the front line owing to the trenches being blocked by a number of men of the Bn in front (“/RF) 86th de. M.G. Coy + consolidating parties. Subsequently it was 08.00 before W +X Coy were able to begin moving out over the parapet. Our own barbed wire was cut only at intervals of about 40yds and by this time the Germans had M.G.’s trained on the gaps. The result being that our casualties were very heavy and only a few of our men ever got through our own wire and still fewer of these succeeded in advancing more than 50 or 60 yards before being shot down. W Coy and Y Coy both behaved exceptionally well under fire. At noon the attack was abandoned and we were ordered to hold and consolidate our own front line – X Coy on right and Z Coy on left.

At 19.00 we were ordered to recover 4 Stokes Mortars abandoned near the German line (on lip of mine crater at HAWTHORNE REDOUBT). Capt. W.P. OULTON with 20 men went out at dusk and succeeded in recovering all 4 guns – without suffering any casualties.

Our total casualties for the day numbered Officers 4 killed(named) 7 wounded (named) 7 missing (named) Roll of O.R. casualties not yet completed but estimated 300.