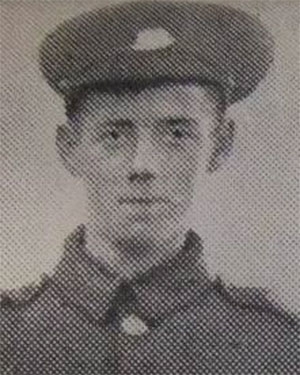 Ernest Camm was the twin brother of William Camm, baptised on 11 November 1894 at Wilmslow, the sons of Mary Ann and William Camm, an agricultural labourer of Newtown, Wilmslow. In 1901, the six year old twins were living at 6 Newtown (off Altrincham Road) with their parents and siblings Arthur Walsh (a stepbrother, aged 16), Richard (12), George (10) and Cyril (2).

By 1911, Newtown had been renamed Park Road, and the 16 year old twins, Ernest and William, were living there with their parents and siblings Richard (20), George (18), Cyril (11), Minnie (4), and another set of twins, Emily and Lucy (2). Twins Ernest and William, and their older brother Richard, were all employed as butcher's errand boys.

Ernest enlisted at Wilmslow, joining the 7th Battalion of the Cheshire Regiment. Following a period of training in various locations in the south of England, the 7th Cheshires, as part of 159th Brigade, 53rd (Welsh) Division, received orders to equip for service in an undisclosed location in the Mediterranean. In July 1915 they sailed from Devonport to Alexandria in Egypt, then on to the island of Lemnos on the 4th August.

On the evening of 8th August, the Battalion arrived off the coast of Gallipoli and the following day landed at “C” Beach, Suvla Bay. Having landed, they came under shell fire at about 8.30am and so moved north along the edge of the bay; they then received orders to attack in the direction of a dip in the hills behind Anafarta Saghir.

At 8am on 10th August the Battalion was ordered to attack Hill 70. This was unsuccessful and the Battalion suffered severe losses. A second unsuccesssful attack took place at 5pm.

It was during one of these attacks on Hill 70 that Ernest was badly injured. He was evacuated from Gallipoli and transported by ship to Devonport Military Hospital, Plymouth, where he died of his wounds and dysentery on 16th September 1915, aged 19.

The Commonwealth War Graves Commission holds casualty details for Private Ernest Camm, and he is listed on the Imperial War Museum’s Lives of the First World War website.