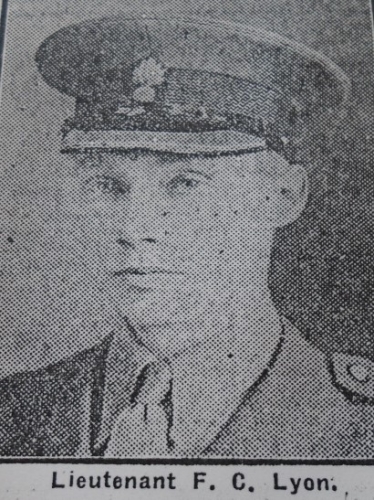 Francis Charles Lyon was born in London in 1896, the only son of Charles (a retired Lieutenant Colonel in the Royal Field Artillery) and Rachel Mary Fearne Lyon of The Orchards, Hanover Square, London. He was the eldest of two children. His grand-father was Sir Arthur Havelock, the Goveror of Madras in India.

By 1911 the family resided at Falkland Lodge, Wash Common, Newbury, Berkshire but there is no mention of Francis in the census. One can only assume he was away at school, for he now resides at 14, Pittville Lawn, Cheltenham.

He was at Eton where he showed a gift for languages and hoped for a career in the diplomatic corp.

He was commissioned in June 1915 into the Grenedier Guards as a second lieutenant and later became a full lieutenant in the 4th Battalion. Following his time at Sandhurst Military Academy he went to France in the Autum. He was 20 years old.

He was killed in action on the 13th April 1918. His Colonel wrote to his father:

˜He was beloved by his fellow officers and respected by his men'.

On that fateful day:

A heavy German attack took place on this date on the British trenches around Le Touronne, held by the 4th Battalion of the Grenedier Guards. The odds were overwhelming in the German's favour.

However, the Division held on, delaying the German's advance and as an account says heaps of enemy dead were pilled up infront of the British trench.

The enemy managed to enfalade (shoot along lengthways) the british trenches resulting in many casualties and killing all the officers of 1 and 4 Companies.

Captain Lyon in 3 Company was killed and the remaining soldiers were taken prisoner.