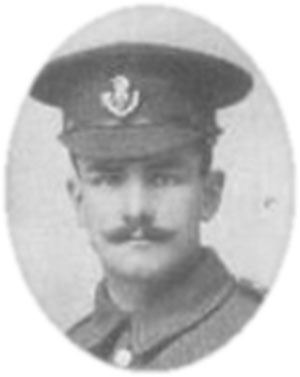 The 1911 Census records John lodging at Lodge Farm, Black Park, Whitchurch and working as a farm waggoner. John married Sarah Roberts in 1912 in Whitchurch, and they had two daughters Esme and Annie.

‘A’ and ‘C’ companies were in shell holes in front of the trenches ready to attack the trenches lost by the 2nd/6th Gloucester’s, the attack commence at 7.30 a.m. covering fire was being arranged for by Lewis Gun and Rifle Grenades on the left forward flank by Lewis Guns of the 2nd/4th Gloucester’s. Very heavy opposition was encountered and the remnants of the 2 companies disappeared, only one or two men returning to the support company (D). At 8 20 a.m. the enemy placed an intense and accurate barrage on the support company. At 8 30 a.m. the left company (‘B’) was attacked by bombing parties on their right flank. At 8 45 a.m. the support company was also attacked on its right flank, they succeeded in keeping the enemy off but with few survivors remaining they were ordered to retire.

After the loss of men on the 3rd December 1917, the battalion was reformed into two companies, later being disbanded in February 1918.

Any information respecting the whereabouts of Private John Maddocks (235082) Royal Warwickshire Regiment, who has been missing since December 3rd, 1917, any news will be gratefully received by his wife.

John was one of four brothers who lost their lives in the Great War.

John and his brothers are remembered on the Roll of Honour in St Mary’s Church, Marbury, Cheshire.