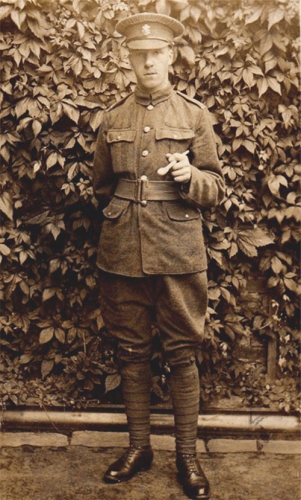 He was baptised 13 Nov 1898 at St John’s. He attended St John’s Parish School. Gordon worked at Ingersley Vale Bleachworks alongside his siblings and his father Joseph.

Gordon enlsited into the Welsh Regiment becoming 60921 Private Stewart. At some point after arriving in France he was transferred to the South Wales Borderers, 2nd Battalion. 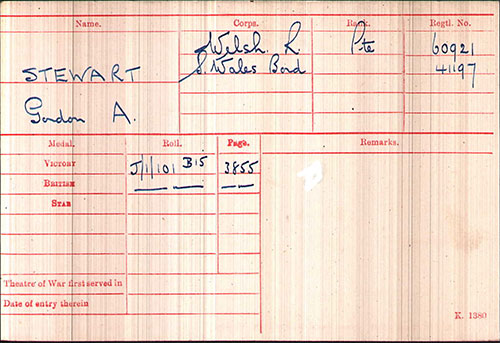 2nd SWB had been evacuated from Gallipoli to Egypt and then moved to France, arriving at Marseilles 15 March 1916. They were part of 87 Brigade in 29 Division. Gordon joined the battalion in France, but the date is not known. The battalion were at Rumilly as part of III Corps of 3rd Army in the battle of Cambrai 20 – 21 November 1917. A significant advance was made on the first day of the battle, but the second day was not so successful. The battalion’s diary for 21 November records 12 other ranks killed, 64 wounded and 75 missing. It appears that Gordon was one of those recorded as missing in the diary, but later confirmed as killed. The diary states:

Marcoing 20th. 23:00hrs The Bn. recieved orders while itself in readiness to renew the attack at dawn on the RUMILLY trenches and village. During the night the hour of the attack was postponed till 11am, the orders also stated that 9 tanks would assist the attack. 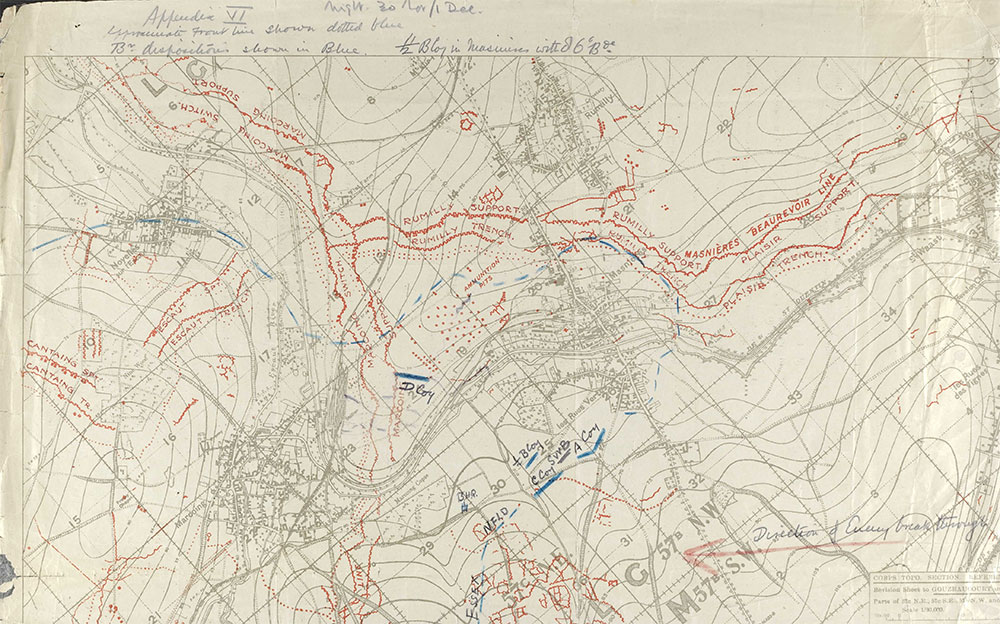 21st. At 6am no further information having been received about the tanks, an attempt was made to get in touch with them. No information could be obtained in MARCOING but 7 tanks were found who were willing to assist though they had been fighting all the day before. Tank officers came forward to arrange details of the advance and at 12 noon the advance started. At the time of the attack Masnieres was still not occupied by our troops. 14:00hrs After the attack at about 2pm the Bn. occupied the line, C Coy. on the left and then the remaining companies who were much mixed up holding the rest of the line to the Cambrai Rd. Bn HQ about 200 yards back in an old ammuntion pit. After the attack had failed orders were received from Brigade to return to our orginal position, but this was cancelled when it was known what line the Bn. had taken up. The end houses of Masnieres had not been entered and after dark a special party was sent to clear them out if occupied and establish a post there. This was done, 1 German and 3 civilians were found there and sent back.


It was during this action on the 21st November 1917 that Gordon was killed, a year and a week after his brother Hedley.

Gordon’s mother Fanny wrote this heartbreaking letter to him asking him why he had not written to her. He had been dead nine days when she wrote this.

My dear Gordon, I have not had a letter from you this week. I know its not your fault. You have not written to me since the 14th of this month. Its been a most anxious week for me. I keep watching for the post. But nothing comes from you. I had a letter from Norman, he said you were on a safe front, I do hope you are. But that does not relieve me any. Norman Gleave came to see me yesterday. He came from France on Tuesday. He will go and see our dear Hedley’s grave when he gets back. He has got a very nice boy. Rupert Hamson went to Chester yesterday. I don’t think he has come back yet. Well dear I cannot write more. But write me a line as soon as you can, if only a card. With best love, your loving and anxious mother, F. Stewart.” 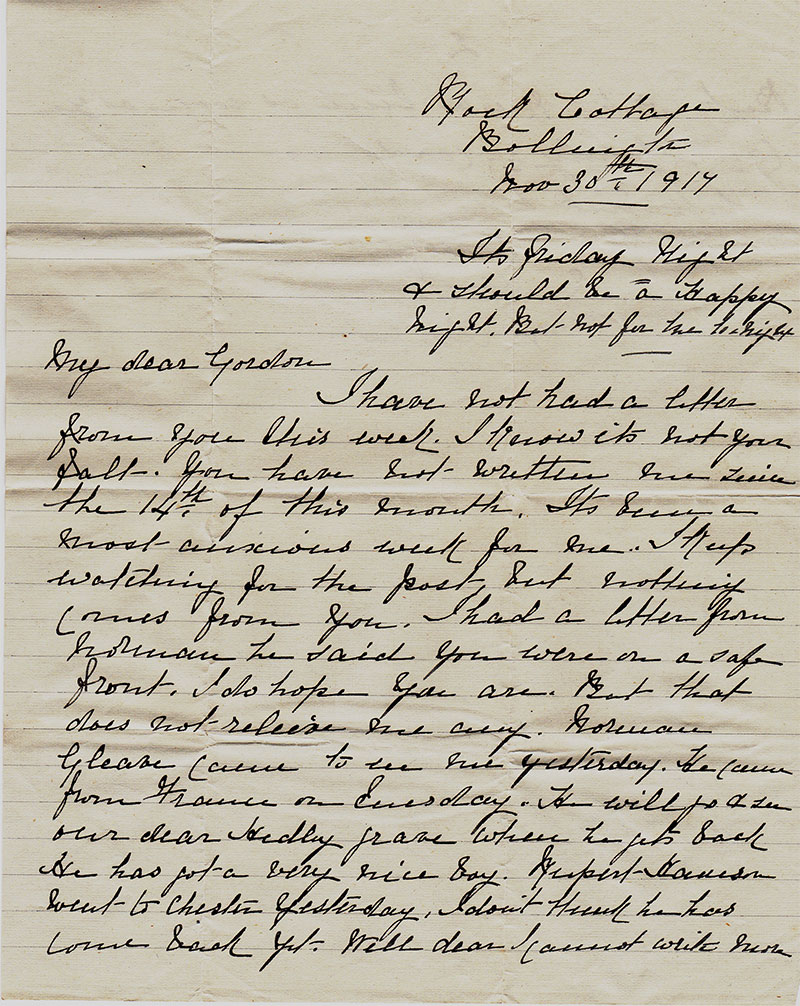 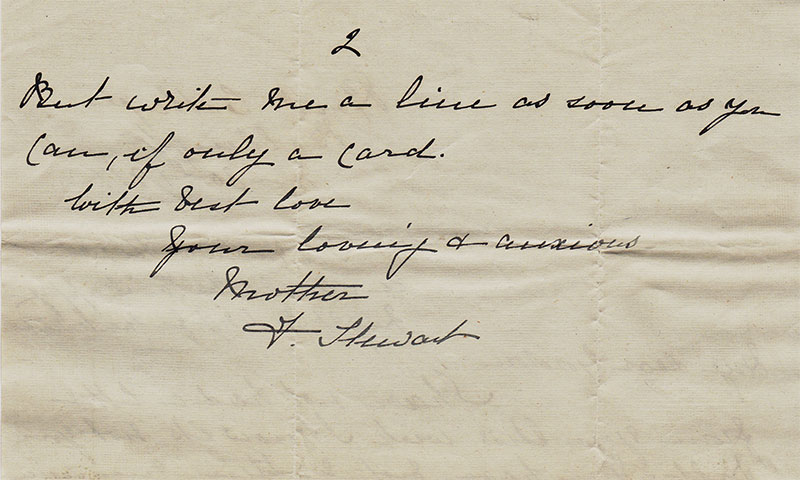 He was named as one of those “who have paid the Supreme Sacrifice during the War” at a Solemn Requiem Service held at St John’s at 10.30 am on 3 November 1918.

Gordon had been buried by the German soldiers with nine others in one grave in Rumilly Cemetery. Their bodies were all exhumed by the British almost three years later in July 1920 and were buried in separate graves 500 yds from Marcoing, not far from where the attack started on that fateful day in 1917. It was not possible to identify the bodies.

Cheshire Roll of Honour would like to thank Linda Stewart for this information.