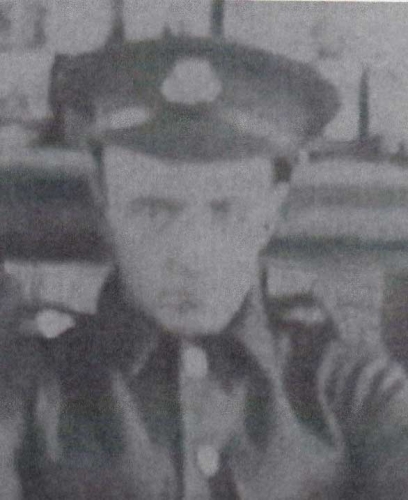 Private Arthur Edwin Brough enlisted in the Cheshire Regiment, under the command of the 118th Brigade, 39th Division in November 1916. His medal index card shows that his next of kin would have recieved two war medals.

Arthur sitting on the floor

The Third Battle of Ypres (Passchendaele) had started on the 31st of July. It had been a disaster for the 1St/6th Cheshire Regiment. A considerate numbers of replacement troops came to the Battalion in early August and the next couple of weeks were spent in training. After a period in the front line, the Battalion was relieved to billets on the 6th of September and would spend the next two weeks at Chippewa Camp near Ypres. On the evening of the 19th of September 1917, the Battalion moved forward to assembly positions in Shrewsbury Forest, to the south east of Ypres. The men were in position by 02:00 hours on the 20th and were intended to be part of the Divisional reserve troops supporting the attack. Two companies were in a forward position and two companies in support of a battalion of the King's Royal Rifle Corps. At 07:40 hours, one of the two reserve companies moved forward to reinforce the King's Royal Rifle Corps. Shortly afterwards, the second reserve company came forward to reinforce the left flank. Later in the day, one of the two forward companies were ordered into an attack on a German strongpoint near Bassevile Beek. The Official History of the Cheshire Regiment describes them as advancing " with great gallantry under machine gun fire, capturing their objective at 19:10 hours. They held this position all night, in the morning, they found that the troops on the flanks had failed to advance sufficiently and they were now being fired on from both sides. The Cheshire's were compelled to withdraw back to the line held by the division. 50 men had been killed. During this action Private Arthur Edwin Brough was wounded and later died.

Biographical details have been given in a previous issue of Private A. Brough who died of wounds on the 29th of September 1917, but since then Mr. and Mrs. Brough who reside in Hatter Street, Congleton, Cheshire have received fuller particulars from the Sister in Charge of the 37th C.C.S. and the Chaplain. It appears that he was seriously wounded on the 27th of September and after having the wounds attended to was conveyed to the Clearing Station during the night. At the outset it was found that his condition was very critical having been wounded seriously and sustained a fracture of the left thigh and it was felt that the consequences would prove fatal. Unfortunately, this proved to be the case, for the young soldier succumbed to his injuries on the 29th of September not withstanding medical skill and careful nursing. The sad news that yet another life had been sacrificed in the Great Cause.

Mr. and Mrs. Brough have received a letter from the Chaplain at the Clearing Station, giving details of the death and burial of the dead soldier. The letter reads as follows.

You will have heard from the War Office that your son Private A. Brough of the Cheshire Regiment died here from wounds on the 29th of September 1917. He was buried by me with a Church of England service, in a Military Cemetery close by and a cross with his name and rank etc. is being placed over his grave. The Director of Graves, Winchester House, St James Square, London, S.W.I. can tell you where the cemetery is. May I add that we are deeply sympathetic with you in your heavy loss and we feel that your son has died gloriously for his country and we can never repay all we owe to such heroes. Christ's words (St John c2. v. 23. and 25.) tell of Resurrection, Recognition and Reunion. May they comfort you.

In the following letter Mr. G. Haycock the writer, sends the sympathy and condolences of all the workmates of the departed hero to the bereaved parents.

Dear Mr. and Mrs. Brough, On behalf of the whole of the staff of the above department I send you a letter of condolence, expressive of our feeling of sympathy and regret at the sad loss of your son Arthur and as a mark of esteem in which he was held amongst us.

He was highly regarded in the parish of St Stephen's in Congleton having been a scholar in the Day School and his death is regretted by many friends, the deep sympathy of whom will go out to the relations in their sad bereavement.


Arthur had listed his father Edwin as his next of kin. In 1919 his father recieved £3 war gratuity.

Cheshire County Memorial Project would like to thank John and Christopher Pullen for this information on Arthur.