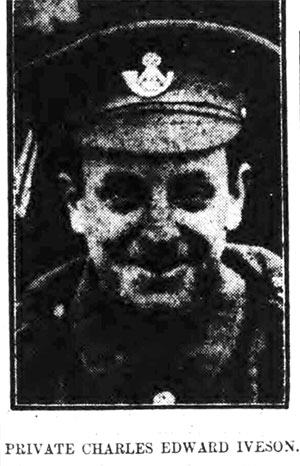 Mr. and Mrs. Iveson, of 12, Warwick street, Birkenhead, have received official intimation of the death at the front of their eldest son. Private Charles Edward Iveson, of the Shropshire Light Infantry. Private Iveson, who would have been 23 next April, had served for three years in the Special Reserve and joined his regiment on the outbreak of war in August. He was in training at Edinburgh, in south Wales, and in Winchester, during which time he frequently communicated with his parents, he left for France just before Christmas. He wrote home twice before his death, once from the base and once from the trenches, and in the latter letter stated that he was in good health and spirits and asked his mother to tell them when he came home, he would bring presents for his little brother and sister. Formerly Private Iveson was an apprentice to Mr. Edmunds, cycle maker, Charing Cross. 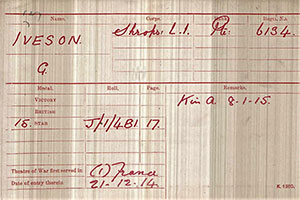 The war diary for the day Charles fell states.

One of those killed was Charles.