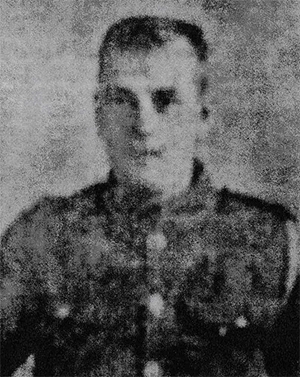 Son of Mr. Samuel Ball and Mrs. Annie Ball, of 17, Union Street, Congleton, Cheshire (overleaf left). He had one sister, Emma Elizabeth Ball, along with three brothers, William Henry, Albert, and Frank Ball. He was employed by Mr. H. Thursfield, Plumber and Decorator of West Street, Congleton. His brother, Albert Ball, was killed in action in France on the 26th August 1917. Prior to enlistment he resided with his brother (Mr. William Henry Ball) at The Marsh, Astbury. Lance Corporal Arthur Ball, enlisted in the Cheshire Regiment, at Congleton on the 25th of May 1915 at the age of 25.

He embarked from England on the 23rd of June 1916 arriving in Etaples the following day where he joined the 13th Battalion in the field on the 1st of July. He suffered gunshot wounds to his left fore-arm and was admitted to the 58th Field Ambulance Station before being transferred to the No 45 Casualty Clearing Station at Achiet le Grand and then the 3rd General Hospital in Boulogne. He then returned to England on the H.S. Janbreyiel for further treatment at Longford Hall, Manchester on the 10th of July. There he remained for about six weeks and after a fortnight in Congleton was sent to Prees Heath. He embarked again for France on the 27th of January 1917 with the Battalion. On the 11th of February 1917 he was posted to the 13TH Battalion. Promotion to unpaid Lance Corporal was attained on the 24th of September which was confirmed as a paid rank on the 28th of January 1918. The 13th Battalion by March 1918 had lost its identity and remaining soldiers were distributed to the 10th and 11th Battalions, Lance Corporal Ball joining the 10th Battalion. He was granted leave to England from the 22 nd of February until the 8th of March 1918 when he stayed at the home of his sister (Mrs. Emma Davies) on the last furlough, he was destined to spend. The Kaiser's Battle is the name given by the Germans to a planned massive assault on the British positions in Picardy. The intent was to drive a wedge between the British and French armies and capture Amiens. It was believed that this would result in victory at last, and it nearly worked. Frontline positions would be overrun, with thousands killed or taken prisoner. All the gains of the previous two years were lost within a week. Because of the confusion, the official War Diary records maintained by Battalions are poor and the events, for many units, were pieced together after the battle from different sources. The story of the Cheshire's comes from the Regimental History. An attack had been expected for some time and preparations had been made. However, the swiftness and ferocity of the initial onslaught was unexpected. The Cheshire Battalions were in reserve when the attack started at dawn on the 21st of March. On the 21st of March, the 10th Battalion was at Achiet Grand, 12 miles north west of the French town of Bapaume. At 06:00 hours they were ordered forward to occupy 1000 yards of trench at Fremicourt, about 10 kilometres to the east. The trench was immediately deepened, and a series of holes 100 yards apart was dug as a support line. The 22nd was a quiet day and all the men could do was wait. At about 09:30 hours on the 23rd, the enemy tried to rush the trenches with a surprise attack on the left, but this was beaten off with rifle and machine gun fire at only 200 yards range. In the early afternoon, the Cheshire's positions were heavily shelled and then at 15:00 hours the Germans attacked in four waves. This attack was again broken up by small arms fire. Later in the afternoon, a third attack met with similar results. During the night the Germans dug in about 150 yards in front of the Cheshire's trenches. On the morning of the 24th, there were signs that the enemy was about to attack again, and artillery support was requested. Unfortunately, the bombardment was inaccurate and many of the early shells fell short on the Cheshire's positions, causing many casualties. By the middle of the afternoon, a further withdrawal of the British line was ordered, and the Cheshire's were supposed to take up a position at Beugnatre. However, before they could occupy the position, the enemy came on in force and the Battalion was forced to fall back to Favreuil. They did this firing all the time and retiring slowly in an organised manner even though by now, all the company commanders and many other officers had become casualties. Although the Battalion War Diary does not mention casualty figures, it is known that Lance Corporal Ball was killed on the 22nd of March, Lance Corporal Harry Horton M.M. was killed on the 23rd, and another two Congleton soldiers were killed on the 24th March, Private Peter Henry and Lance Corporal John McGarry M.M.

Extract from the Congleton Chronicle 1918.

He had only returned to France a fortnight before he was killed. The rank and file had the highest opinion of and admiration for him as a soldier who would do his duty, one who was steadfast in his friendship and true to his salt. Very great sympathy will be felt for the family, who have now suffered a double bereavement, but they have the consolation of knowing that the two brothers were among those who recognised the difficult task set the Allies and recognising such, went out to meet the storm.

Great sympathy was felt in the town when the official news of the death of Lance Corporal Arthur Ball, of the Cheshire Regiment, became known, for it is only six weeks since he was over on leave, enjoying a well merited respite after a long spell of fighting on the Western Front. Lance Corporal Ball had long ago proved of what stuff he was made, for he was one of those gallant band of Congleton lads who volunteered for service at the outset and after training in England, went out to France. Since then he has seen some hard fighting and would have had a stirring tale to unfold had he been spared. It was not to be however for his sister (Mrs. Davies, of Mill Street, Congleton) last week received news that he had laid down his life for the cause.


Cheshire County Memorial Project would like to thank John and Christopher Pullen for this information on Arthur.