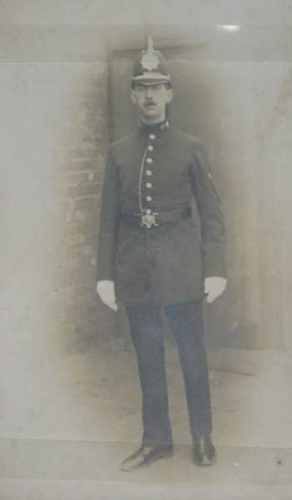 Little is known of Ernest’s early life except that he was born in the Stockport area and lived all his life in the town until he enlisted into the army. In 1908, he married Jessie Elizabeth Hughes at St Mary’s Church and they lived at 54 Thomson Street, Edgeley. They are thought to have had only one child – Clifford, born in 1912. Ernest was a Constable with Stockport Police and it was, perhaps, no surprise that when he enlisted, he was assigned to the Military Police. The main responsibility of the Mounted Branch was in traffic control duties, ensuring that the flow of troops and stores to and from the front line moved as smoothly as possible. Although clearly not as dangerous duty as life in the trenches, the military police would be reasonably near the front line and, certainly, within range of enemy artillery. Ernest was reported to have been killed instantaneously by shrapnel from an exploding shell.

The Cheshire Roll of Honour would like to thank John Hartley for this information about Ernest.