Joseph's father, John Needham, had been a regular soldier, serving with the Middlesex Regiment and Joseph decided to follow in his footsteps. In June 1914, just a few weeks before War was declared, he left his job at Lomas' Ltd, Lower Wellington Mills, Stockport and enlisted into the Cheshire Regiment. His name is included in the Company's entry in the Manchester City battalions Book of Honour. His parents are thought to have died by this time and he lived with his older married brother, John at 1 Walker Street. Joseph arrived in France 18th December 1914 and joined the battalion on the 24th 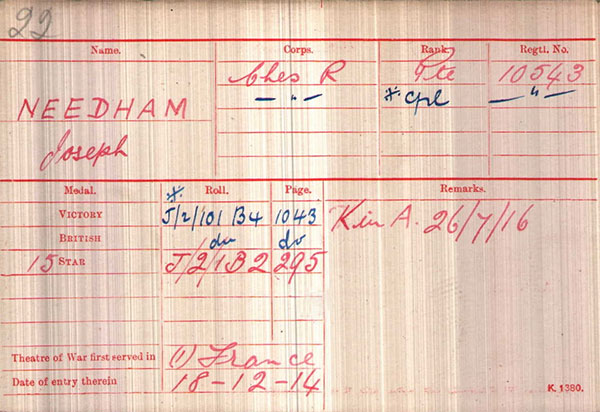 In March 1915, the Battalion was fighting around St Eloi, a few miles south of the Belgian town of Ypres (now Ieper) and Joseph undertook an act of the greatest bravery for which he was awarded the Distinguished Conduct Medal.

The local newspaper recounted that he "volunteered to accompany a doctor attached to the Royal Army Medical Corps to the assistance of a lieutenant of his Regiment lying wounded, bleeding to death, in a trench between the British & German positions. An open space of about 300 yards, right in the zone of fire, had to be crossed, but the doctor and the young soldier both managed to get through in safety in spite of a terrific fusillade of shots from rifles and shells from heavy guns. The doctor was able to give the officer the attention that undoubtably saved his life. An attempt was then made to start back to the rear trenches, bearing the wounded man on a stretcher, thereupon the Germans poured a hot fire on the three men. The lieutenant was again hit in the leg and the doctor was shot through the lung, the wound causing his death three days later. Private Needham alone escaped unhurt”.

The doctor, Lieutenant Derwent Christopher Turnbull died of his wounds on 14 March 1915 and is buried in Ramparts Cemetery, Ieper. The name of the officer they rescued was Guy Leslie Hazeon, who was attached to the 1st battalion Cheshire Regiment from the Royal fusiliers, like Joseph he had joined them 24th December 1914, he would survive the war.

The Stockport Express, 8 February 1917, reported that Joseph's medal was presented to his brother John and his wife by the Mayor of Stockport.

On 25 July 1916, Joseph's Battalion was in a support trench formed out of a recently captured German trench near the village of Mametz, in the south of the Somme battlefield. During the evening, "A" and "D" Companies went into the front line between High Wood and Longueval, relieving two companies of the Devonshire Regiment. During the evening of the following day, "B" Company went into the front line, relieving a company of the 12th Gloucester’s, west of Longueval. Throughout this time, the troops were subject to periodic artillery shelling and, whilst the Cheshire’s' War Diary records that the day was "moderately quiet", there were about 25 casualties. Joseph has no known grave and is commemorated on the Thiepval Memorial to the Missing.