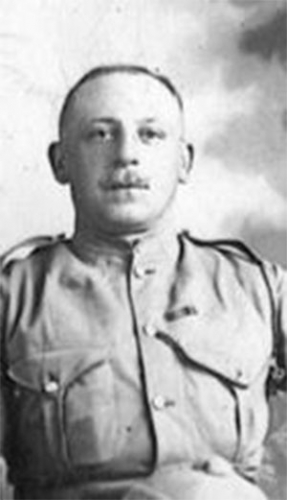 Thomas in his early years was educated at a private school before completing his education at the Modern School. When he left school, he joined his father in the family business, and later he started up in business on his own account in Mill Lane, Sutton, where he remained for eight years. Thomas married Rosa Thompson in the third quarter of 1906, at Congleton. He then opened a shop in Roe Street and was trading there when war broke out.

Thomas attested in September 1914 at Macclesfield. He had previous military experience,having served for 19 months with the Cheshire Imperial Yeomanry in the South Africa war; here he received a wound to his shoulder. Thomas was drafted with the British Expeditionary Force to France, 24/03/1915, and after being there for two months, he suffered a wound to his head on 7 May 1915, fighting at Hill 60. After he had recovered, he was drafted with the Egyptian Expeditionary Force to Egypt, he was stationed here for 2 years and four months, before being posted to France. In France, Thomas was the victim of a gas attack, and he died in No 18 General Hospital of this wound (gas), Sunday, 28 April 1918, he was aged 39 years.


The Cheshire Roll of Honour would like to thank H.A.G. Carlisle for the information and picture of Thomas