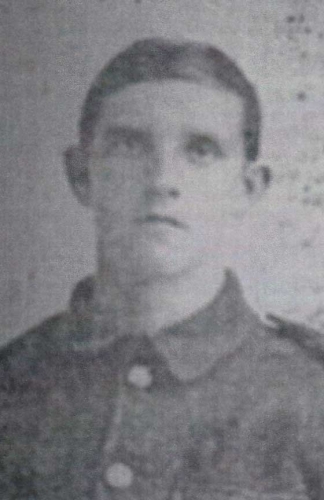 Private Harry Dale served with the 5th Battalion, the King's Shropshire Light Infantry who were part of the 42nd  Brigade, 14th Light Division. He enlisted on the 18th of April 1916. On the 15th of September 1916, the Battalion attacked in the Battle of Flers, which was part of the ongoing Battle of the Somme.

The attack was supported by tanks for the first time in history, and was generally successful although it did not gain as much ground as expected. Early on the 16th, the Shropshire Regiment were relieved by the 6th Battalion, the Duke of Cornwall Light Infantry and after having eleven hours rest in the Montauben area, the Battalion was again in the trenches in relief of the 8th Battalion, the King's Royal Rifle Corp. An order which was received to capture Gueudecourt was cancelled and the Battalion was relieved, it marched back to the camp at Maricourt from where it had started on the 15th . The casualties for the 16th of September were 1 Officer, 2 Other Ranks killed and 8 Other Ranks wounded. Private Harry Dale was one of only two men killed during the day, most probably by shell fire.

Cheshire County Memorial would like to thank John and Christopher Pullen for the information on Harry.